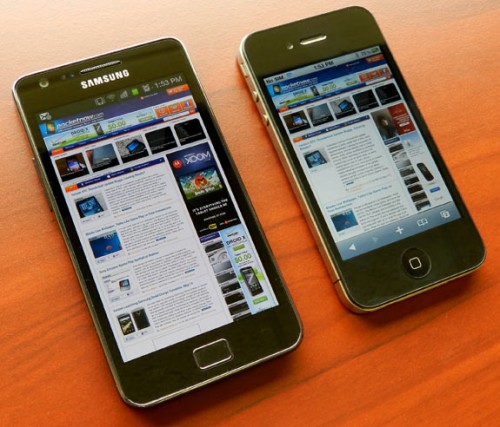 Samsung has never failed to amaze us with its lineup of Android handsets. The Samsung Galaxy S has remained the company’s flagship device for quite some time and now all eyes are on its successor, the Samsung Galaxy S II, to take the handset to new heights.

The obvious question, however, is that how does the Galaxy S II measure up against the current best smartphone out there,
Hands-On the Apple iPhone 4. Pocketnow has made an extensive video review of Samsung Galaxy S II vs iPhone 4, and we’ll be sharing it here for you, along with our thoughts.

First up, is the price. The iPhone 4 is affordable for a greater number of people because mostly it is sold locked to a certain carrier. So in the US, the iPhone 4 16GB can be purchased for $199 and the 32GB one for $299.

On the other hand, the Galaxy S II isn’t being sold locked to any particular carrier at this point. So be prepared to shell out around $700 for the 16GB variant and much more than that for the 32GB variant. The best part is that you have expandable memory on the Samsung Galaxy S II, so even if one goes for the base 16GB model, there will always be a possibility of increasing the memory.

We mentioned this in our extensive Samsung Galaxy Ace review and we’ll say it again here. As soon as you hold these particular handsets from the Galaxy lineup, at once you’ll notice that they are very iPhone-esque. Apple seems to agree too, that’s why they sued Samsung over the Galaxy line of handsets, however that is another story.

Upfront, you’ll notice that the Samsung Galaxy S II has a Home button, dead center, similar to the iPhone 4. The bezel that goes around the device and the speaker grill all tell the same story. It’s the back that sets the Samsung Galaxy S II apart. The camera is placed in the exact center, and the back cover is removable to give access to the battery, unlike in the iPhone 4.

With a confirmed dual Apple iPhone 5 Dual-Core A5 Processor for the iPhone4S/iPhone 5, we know that competition for the SGS II isn’t far away. Apple knows what Samsung has come up with, and while we’re still unsure about the next generation iPhone release, something tells me that Apple will do whatever it can to come on top again, in the sitting arena.

In terms of camera, the Samsung Galaxy S II takes the lead again. The back camera is capable of taking stills at 8 megapixels and recording full 1080p HD video. The front-facing camera is a handsome shooter at 2 megapixels.

The iPhone 4′s camera was considered to be the best up till now, as it takes HDR photos with its 5-megapixel camera whilst shooting 720p video. The front-facing camera on the iPhone 4 is a meager VGA camera. However, don’t forget what Apple might have in store for us. The next-generation iPhone is rumored to sport a 12.6-megapixel camera with full 1080p HD video recording with relocated LED flash.

So it all boils down to this. The Samsung Galaxy S II has now taken the lead, in terms of performance and specification. Nevertheless, don’t expect Apple to sit on its chairs and do nothing. Apple is full of surprises, and we have yet to see what the company introduces the next generation of iPhone. Until then, the Samsung Galaxy S II can enjoy its reign as the ultimate Android smartphone king.