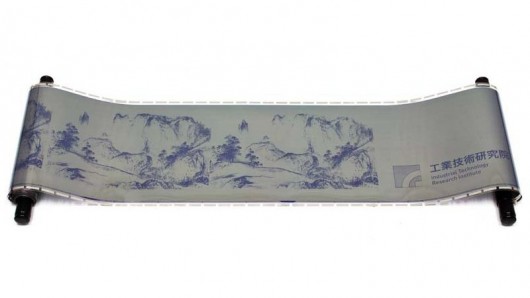 Taiwan’s Industrial Technology Research Institute (ITRI) has developed a highly flexible electronic paper (e-paper) that’s both re-writable and re-usable, and like the Boogie Board electronic memo pads, the technology doesn’t need electricity to retain the screen image. The institute is currently in licensing talks with manufacturers at home and in the U.S. and has taken first prize in the Materials and Basic Science and Technology category of the Wall Street Journal’s Technology Innovation Awards. 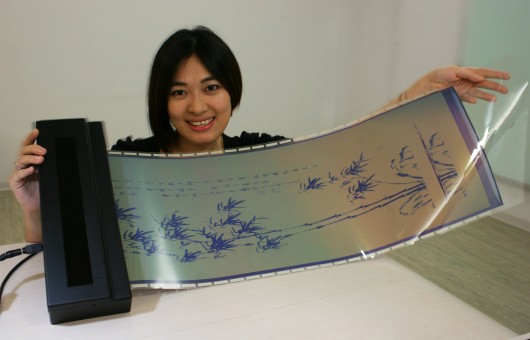 The nonprofit research and development institute describes its i2R e-Paper technology as a flexible cholesterol liquid crystal panel and is so named because it has a similar structure to biological cholesterol molecules.

A thermal printer fitted with a thermal head requiring 86°C (186.8°F) in temperature and just 37W of power heats the liquid-crystal layer, turning molecules light or dark. Running an already printed i2R e-Paper sheet through such a printer wipes the existing content and replaces it with something else. ITRI estimates that its bendable, thin plastic development – which can be produced in a number of different sizes – is re-writable up to 260 times before needing to be replaced, although technicians are continually building on this achievement and have managed rewrites hundreds of times beyond the current limit.

Once the end of its useful life is reached, the plastic PET substrate, high molecular liquid crystal material, nano pigment absorption layer material and silver electrode are all recyclable.

The institute says that water solvent marker pens can be used to annotate the published content and the notes just wash off after use, like a roll-up digital whiteboard. Red, green and blue colors can be produced by adding different pitch spherical composite ion-ex changes during the process, making the i2R e-Paper useful for future applications in color e-books, magazines, and newspapers.

Don’t Miss: How Magic Finger can turn any surface into TouchPad

“It’s a fact that a significant portion of daily office printed papers will be discarded in days or weeks after use,” said Dr. Janglin Chen, general director of ITRI’s Display Technology Center. “i2R e Paper’s re-cycle and re-use capabilities, positive effects on the environment and low-cost of production are paving the way for mass acceptance of green e-paper technologies.”

The i2R e-Paper technology has already been licensed to Taiwan’s Changchun Plastics, which plans to begin trial mass production next year. It’s also led to ITRI emerging victorious in both the Wall Street Journal’s Technology Innovation Awards (for the third year in a row – last year taking Gold for its FlexUPD paper-thin, flexible AMOLED display technology) and the R&D 100 Awards.