Goodbye to the android market and hello to Google Play….who said so, of course, one name and it is Google, week, the famous search engine, and now a popular technology target setter. let’s come to the story.

Google is bringing changing day by day to bring new horizons in the field of mobile technology and now it has made a change in its online apps store.it says that Google’s apple store is no longer is called the android market but it is known as Google Play.

Starting from the week, all of Google’s digital media services (like games, apps e-book, music, videos, etc ) have been remanded to fly under a brand new banner: Google Play.
That’s right gadget buffs, despite some delectable new rumors Google Play isn’t a new tablet from the folks at Mountain View, but rather a unified brand that seeks to tie the company’s digital media services together.
t’s also entirely cloud-based. If you purchase and start watching a movie on your smartphone, you can pick up where you left off on your LCD monitor. Google Play keeps your content in sync, but without downloading content to each of your devices.

There are some perks, too. Google points out that with Google Play you can: 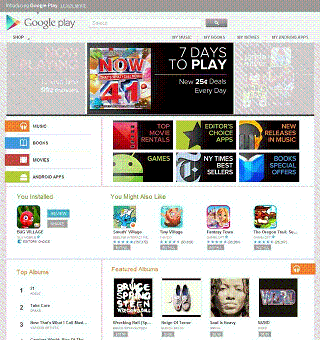 This store is just like iTunes and some of the persons also criticize its name of Google play, but still, then it is a great place for the users to collect updated and latest materials for their phones free or at low affordable price.
so why wait just visit the official Google Play Page
source:maximumpc