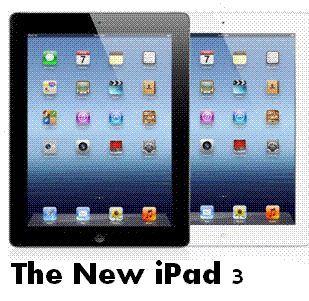 and just in 72 hours its sale top 3 Million. It is a great sale of the history, and credit goes to its incredible design, remarkable outlook, and great functions, Everyone which induced the users to have it in their hands.

see the launching ceremony of iPad 3 below

Why New iPad 3 is PreEveryone

The new iPad Wi-Fi models are available in black or white colors. Apple has packed a huge amount more pixels into the 9.7-inch screen – 1536 x 2048 to be exact. However, despite the fact that the Cupertino brand makes a big thing about the 330 PPI density of the iPhone 4, we’re looking at a screen that’s technically a lot less sharp than its smartphone brethren – around 264PPI.

see the details of a new tablet