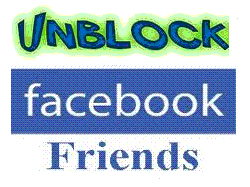 Facebook, a leading social media enhance the user-friendly platform for a couple of years. Like others, you can have more options to explore the world, not only with media but also with chat and other so many things.

So while chatting on Facebook we may block some of the friends but after a while or so, we need to unblock them again so the current short tutorial will help in the same way to unblock a friend on Facebook.

Read also: How to add Facebook Chat to Firefox Sidebar

I hope this short tutorial will help you to block and unblock friends on Facebook.