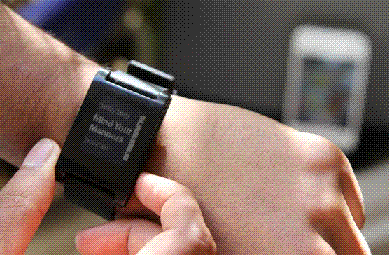 Kickstarter is famous for new and emerging ideas. what’s now revealed..? it is iPhone compatible Pebble Wristwatch. which is not only compatible with iPhone but also supported Android smartphones, just like Google project Glass this device is also innovative and is setting new trends.

When talking about the iPhone Compatible Pebble Wristwatch It uses an e-paper display just as Paper Phone and similar to the screen on the Amazon Kindle Fire and connects to the iPhone (and Android devices) via Bluetooth. Pebble uses vibrating alerts to tell the wearer of incoming calls, emails, calendar alerts, Facebook and Twitter messages, weather alerts, and more.

It also has an extensive SDK for developers and its own “Pebble watch app store”. It will also be waterproof enough to swim with, but it will not be a dive watch. The smartwatch is available in different styles and features

The company behind the watch even has experience with smartwatches. Pebble has been making a BlackBerry-compatible watch called the in Pulse and is a graduate of the Y Combinator start-up incubator. It has now received pledges for $3.8 million from 26,500 backers on Kickstarter for a watch that will retail somewhere around $150 when it goes on sale this fall.

Pebble told MacRumors that it’s treating Kickstarter as a discounted pre-order mechanism, and once the funding period closes in a month it will continue taking orders to make iPhone compatible watch on its website. US buyers can pre-order a Jet Black Pebble watch via Kickstarter for $115, while foreign buyers will pay slightly more to cover shipping. Pebble has now passed the $4 million mark.
source: macrumors