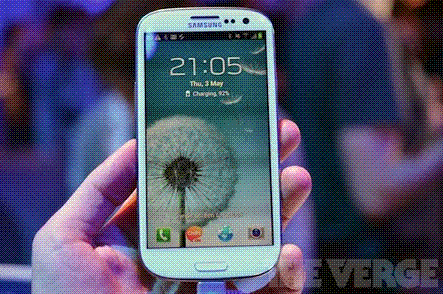 Samsung is known as the leading brand in the cell phone industry. Keeping its revolutionary touch Samsung unveils a new android based Galaxy S III.

In its unpacking ceremony in London, they have unpacked their latest Samsung phone with an android 4.0 operating system have an 8-megapixel camera and enriched with an ice cream sandwich Ram.

What is special in Android-based Samsung Galaxy S III:

Let’s have a bird’s eye view The Galaxy S3 ditches the hard square angles of its predecessors in favor of a more rounded design that shares more than a passing resemblance to the Galaxy Nexus. The case itself is being offered in “Pebble Blue” or “Marble White”, and aims for a more organic feel, rather than the slab of glass designs we’ve seen on other smartphones such as the Droid series or the iPhone 4. The slight shift in design may also have something to do with keeping Apple’s lawyers off its back this time around.

See the Full Specification below:

Galaxy announcement was dominated by software. For starters, there’s S Voice, a service that promises full control over your S III using only your voice, much like Apple’s Siri. And like Apple’s offering, S Voice requires a data connection as the processing is done in the cloud. There’s also a new feature called Smart Stay, in which the S III uses its front-facing camera to track the user’s eye location, dimming the display when you look away to conserve power, and S Beam, which lets files be transferred between devices using NFC and Wifi Direct. The redesigned Touchwiz interface for the S III sees the signature dock bar at the bottom of the screen now holding five icons rather than four.

Its latest operating system with a powerful processor will enable to use of Google Play without any interference.

It will be in the U.K markets on May 28th and the rest of the world shortly after. So Let’s wait for its arrival.
source:gizmag