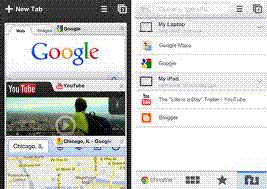 Google has recently launched Google Project Glass and now it is come up with its famous browser Google Chrome which is available now for Apple’s iPad and iPhone. 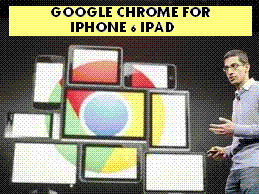 What is special in Google Chrome for iPad and iPhone:

The new app was unveiled during the second-day keynote at Google’s I/O conference in San Francisco, where Google also revealed that Chrome already has 310m active users on other platforms: mainly computers, although a beta version for Android was released on February 2012.

The most powerful part of Chrome and the reason many people might choose to use it is its ability to sync with other devices that are also running the browser. It is incredibly easy to access all of the tabs that are open on another device right from an iPhone or iPad, making

it simple to move from the desktop to a mobile device. Users also can sync all of their bookmarks and saved passwords with the mobile iOS version of Chrome.

Google Chrome for iOS looks and operates exactly like the desktop and Android versions, and is available for the device running iOS 4.3 and higher.

watch out the video below for chrome.

So why wait just  Download Chrome for iPad and iPhone from Apple App Store.