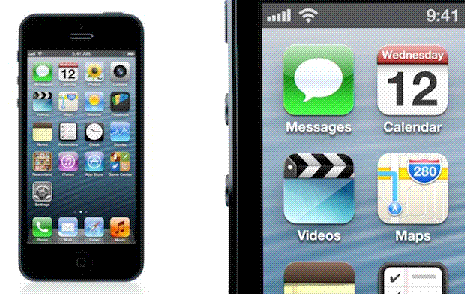 Apple finally revealed its famous brand iPhone 5. When talking about the iPhone 5 Specifications and Released date there are a lot of rumors but finally, it will be in your hand and now you can enjoy the thinnest, lightest and fastest handset yet as the brand behind today’s personal computing revolution sets out to prove that it still has the creative edge to dazzle consumers without Steve Jobs at its helm.

The new iPhone includes improvements to voice calls, too. It’s now equipped with three separate microphones — on the front, on the bottom, and on the back.

Apple says the multiple mics will help Siri’s performance. The earpiece is equipped with more noise cancellation, and there’s also now “wideband audio” technology, which is said to make voice calls more natural — similar to HTC’s HD Voice tech in the Evo 4G LTE.
Read Also: Samsung Galaxy vs iPhone 4
The iPhone 5 goes on sale Sept. 21 in the U.S., Canada, Japan, the U.K., Germany, France, Australia, Hong Kong, and Singapore. It has similar pricing to its predecessors, starting at $199 for 16GB of storage with a two-year contract, and there are 32GB and 64GB models available for $299 and $399, respectively. Pre-orders already started from  Sept. 14. Apple says the phone will be available in 100 countries on 240 wireless carriers by the end of the year.