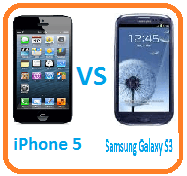 The Samsung Galaxy S III has been around the Globe since May 2012 and iPhone 5 is also in the hands now, both have a sleek design, impressive look but they should buy iPhone 5 or Samsung Galaxy S III. We’ve taken a look at the features of both phones, put them in the ring, and told them only one is coming out alive. Here’s how they fared…

You will get a hands-on comparison between these two smartphones in today’s post.

Let’s start a comprehensive look at both the smartphones, but first, take the display.

Every generation of iPhone since the original of the species back in 2007 has used the same size screen – 3.5in. That has all changed with the iPhone 5. It now has a widescreen 4in a display of 1,136 x 640 pixels.

It’s this change of screen style that will make the iPhone 5 able to offer a larger screen without making the phone any wider. Pixel density is the same as the iPhone 4S too, although the new aspect will make it much better to watch movies on.

On the other hand, the Samsung Galaxy S III cares a lot less about how wide it is than the iPhone 5. With a gigantic 4.8in the display, the Galaxy will be too wide for some hands – it’s a whopping 7.6cm across. Screen pixel density will be comparable to the new iPhone, though, with 720 x 1,280 spread across the display.

Visibly seeing a huge size disparity between the two, the iPhone 5 is undoubtedly easier to grasp in the hand, seeing that it’s lighter in weight, skinnier in the frame, and not as cumbersome to hold in the hand as the Galaxy S III. In addition, it’s quite evident that the iPhone 5 is the more premium looking device between the two, as it sports a brushed aluminum rear casing and sturdier construction. However, there’s no doubt in our mind that the Samsung Galaxy S III would probably handle a fall a lot better than its rival – mainly because its plastic body wouldn’t be as badly beaten up.

The battle of iOS versus Android is one we’ve been watching ever since 2008 when Android was born. Android has changed a good deal more than iOS in that time and is finally getting close to becoming as slick and quick as iOS. Apple’s OS has always been pretty nippy.

The Samsung Galaxy S III isn’t quite there yet, as in most territories it still uses Android 4.0 Ice Cream Sandwich ROM rather than the latest Jelly Bean version. Android 4.1 Jelly Bean ROM sees the start of an initiative called Project Butter. This is designed to take full use of the processor power available, with the aim of running Android at a solid 60fps.

Although many elements of the iPhone 5 have been improved hugely over its predecessor, the camera has only been given a slight upgrade. It’s still an 8-megapixel sensor, and it still uses a pretty standard LED flash. Its aperture is f/2.4 and it uses a five-element lens. Like the iPhone 4S, the sensor offers backside illumination.

The Samsung Galaxy S III has an 8-megapixel sensor and reams of features including image stabilization, touch focus, 1080p video capture, and an LED flash.

However, its image quality is at best on-par with the iPhone 4S’s camera (and outperformed by it in some conditions) and we hope that the iPhone 5 will offer some significant improvements.

Unlike other similar panorama modes, we’ve seen this one keeps the full-size image, giving you up to 28 megapixel images – nice.

The iPhone 5 hasn’t gotten a huge battery increase over its predecessor. The iPhone 4S has a 1430mAh unit, and the iPhone 5 a 1440mAh unit. It’ll last for 40 hours of audio playback, or up to eight hours of talk time, with 3G, enabled.

Also, like previous iPhones, you can’t swap out the battery on the iPhone 5, so if you’re caught short without power you’re done for… well, your phone is anyway.

Samsung made a particularly strong effort with the latest Galaxy’s battery, outstripping most of its rivals by around 20 percent. For example, the HTC One X uses a 1800mAh unit and the Sony Xperia S a 1750mAh battery.

The Samsung Galaxy S III is more flexible, with expandable memory and a more malleable OS. However, the metal body of Apple’s phone feels a lot more premium and is a much friendlier design for those with less than giant hands. And with the larger 4in the screen, it won’t feel quite so tiny next to the Samsung Galaxy S III, either.

The decision is in your court now that which one is user-friendly.