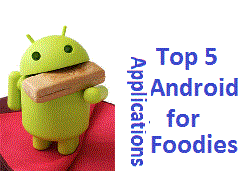 Top 5 Android Apps for Foodies is the topic of today, as we know that android market is being blessed with new and trending apps day by day.

We have something new and informative best android apps that may ease our life, so let’s see how the topic of today will help us in this manner.

Suppose your girlfriend just told you she wants to eat at a Thai restaurant tonight and you haven’t a clue where to go. You’re standing in the grocery store, confused about which breakfast cereal is the healthiest choice for your family. Or, you are making your grandmother’s borscht recipe and want to find a farmers’ market in town that sells fresh beets. There are Android apps for all of those situations and more. Below are a few of our favorite Android apps for foodies:

Are you interested in seeing how that corner restaurant fared with their latest health inspection? Would you like to see how other diners viewed the food safety and overall cleanliness of your favorite eatery? Dining Grades, free Android apps, does just that. The program lists thousands of restaurants from all over the United States. You can sort reviews by zip code, city, and/or type of food.

Do your eyes glaze over when you look at the laundry list of ingredients on most grocery store food packaging? Are you more confused than when you started reading a couple of boxes or cans? “Fooducate” can help. This free app allows you to scan the barcode of more than 200,000 different products and it will instantly tell you the ingredients. There’s also a section that tells you the healthiest cereal, spaghetti sauce, or scores of other foods.

The Android version of the popular Zagat guidebook lists more than 30,000 restaurants in 14 US and international cities, as well as 10 US regions. In addition to reviews, the app lists menus, hours, and locations. You can even reserve a table using Zagat To Go. Cities featured in this $9.99 app include New York City, Seattle, Boston, Los Angeles, London, Toronto, and Paris.

This nifty app helps you locate fresh produce, wherever you are. The $2.99 app determines your location when you open the program and tells where the nearest farmers’ market or food stand is located. Locavore also advises you what foods are in season and gives recipes that use local, in-season produce.

Want to know where the top chefs in your city spend their hard-earned dollars when they go out to eat? You might be surprised to learn that these seasoned “foodies” don’t necessarily dine at the most famous restaurants. Chef’s Feed covers nine US cities, including Austin, Chicago, Washington DC, San Francisco, and Seattle, with more cities being added all of the time. Currently, there are thousands of restaurant recommendations listed, quoting local chefs’ own words. Chef’s Feed is a free app.

So, stop fretting about that restaurant choice, complicated menu, or where to find your ingredients and turn to your phone. With the right apps, you’ll have an answer in minutes.

What apps do you use when you’re looking for the restaurant, the freshest produce, or the tastiest “cheap eats” in town? hope so you will get something exciting from the top 5 android apps for foodies, Share your favorites by leaving a comment below.